How to read the ECE symbol A combination of a letter "e" and a numeric code (in a circle or a rectangle) indicates the country, where the tyre was first registered. This is followed by two digits describing the series of Regulations used to certify the tyre (e.g. "02" for ECE Regulation 30 for tyres used in cars and "00" for ECE Regulation 54 for tyres used in delivery trucks), followed by digits indicating the type of ECE certification.

Which tyres meet the ECE standards? 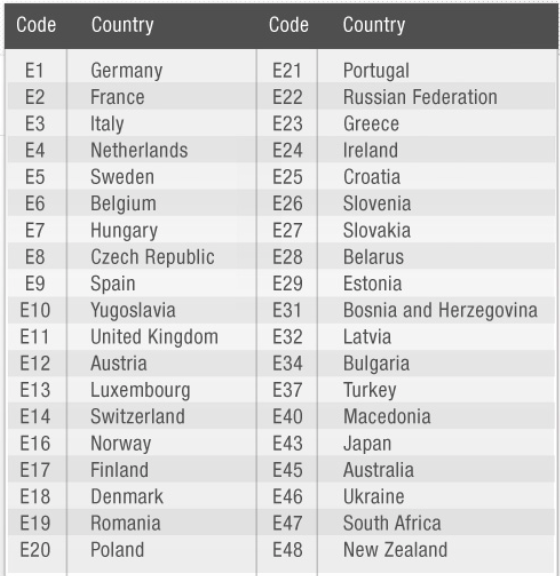 The ECE symbol on the sidewall shows that a tyre meets all tyre regulations that appear in its description, including the load and speed ratings. In order to obtain the ECE symbol, a tyre has to be certified in a laboratory, pass conformity testing while the manufacturing plant has to pass quality control testing.

Depending on the scope of testing hats given tyre, its sidewall may contain one or two ECE symbols. Not all tyres are subject to ECE certification. Tyres for use outside of Europe only need to be certified in the countries of use.
The list on the right provides selected E.C.E. codes and the countries they represent.

The standards require that the noise a tyre makes when "passing by" is within certain limits. These standards have been gradually implemented since the beginning of 2004. Since then, all tyres installed as Original Equipment on new vehicles have to pass noise level tests. Tyres meeting these requirements include the 'S suffix (sound).

Tyres that have been tested and meet the "pass-by" noise limits and net traction can have a second E.C.E. branding followed by an "-s" (for sound) and "w" (for net traction). Depending on the extent of tyre testing completed, one or two E.C.E. symbols may appear on the tyre's sidewall.