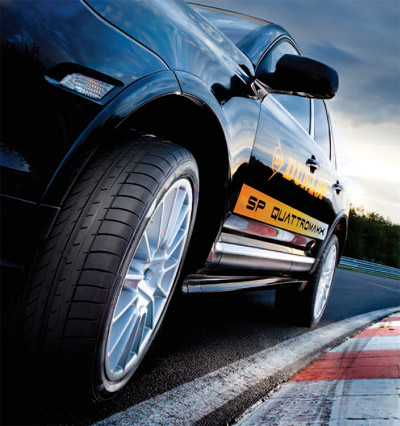 THE DESIGNERS AND ENGINEERS AT DUNLOP WERE FACED WITH ONE OF THEIR TOUGHEST CHALLENGES TO DATE, TO CREATE AN ULTRA HIGH PERFORMANCE TYRE SUITED TO THE CLASS OF POWERFUL SPORT UTILITY VEHICLES (SUVS) THAT COMPLIMENTS THE NATURAL HANDLING CHARACTERISTICS OF THESE LARGE AND HEAVY VEHICLES.

Increasing numbers of SUV engines are capable of outputting an immense amount of power. This power, combined with the fact that an SUV’s centre of gravity is significantly higher than other types of vehicles, creates a challenging set of performance requirements for an SUV tyre.

Dunlop identified the need to develop a tyre not only capable of coping with, but also complimenting these special SUV driving characteristics. The new ultra high performance SP QuattroMaxx is Dunlop’s answer to this growing demand.

To prove its credentials, in October 2009 prior to the global launch of the tyre in 2010, the SP QuattroMaxx – mounted on a standard Porsche Cayenne Turbo S driven by experienced racing driver Patrick Simon – shattered the then SUV lap time record at Germany’s famous Nürburgring Nordschleife circuit with a time of 8:33.99, over 16 seconds quicker than the previous mark.

73 corners, an 18 percent ascending gradient and an altitude difference of 290 meters make Nürburgring the toughest race track in the world. 20.83 kilometres of extreme mountain and valley driving with different types of asphalt demand the utmost from the driver, car and tyres.

“’The Ring’, as it is affectionately known, remains the ultimate testing ground for new products, where their quality, durability and performance are put to the most extreme of tests”, said Blake Vincent, Dunlop Consumer Product Manager.

“The Dunlop SP QuattroMaxx has proven its excellent performance with one of the fastest SUV lap times at the challenging track with an extremely heavy car.”

The new SP QuattroMaxx incorporates Dunlop’s latest tyre technologies – including its set of successful ‘Touch Technology’ features that driving enthusiasts could already experience with the successful SP SportMaxx TT and other Dunlop top of the range products.

“The SP QuattroMaxx is a classy tyre with outstanding performance, designed for luxury and powerful vehicles,” adds Vincent.

“Its sidewall has been designed by the Italian designers of Pininfarina to underline the tyre’s leading market positioning. The SP QuattroMaxx is the first tyre ever to feature Dunlop’s “Design by Pininfarina” logo.”